At a recent CREW meeting, Debbie Frank, senior development project manager at MARTA, and Alex Chambers, regional vice president of of KDC, the developer behind the sprawling new State Farm headquarters in Dunwoody, discussed the increasing popularity of transit-oriented development (“TOD”). The speakers maintained that proximity to public transit—namely MARTA—has become a major consideration when choosing an office site.

The State Farm development, now known as Park Center, is one of Atlanta’s most prominent transit-oriented developments. The one-million-square-foot, four-acre project—which in later phases will grow to encompass 2.2 million square feet—was designed for easy access to the Dunwoody MARTA station. Because proximity to public transportation was such a high priority for the company, State Farm built a 100-foot pedestrian bridge connecting its Atlanta headquarters to the Dunwoody station as a key part of the massive project. At the ribbon-cutting ceremony for the bridge last month, State Farm said that ten percent of its employees at the headquarters are already using MARTA.

In an article in the Atlanta Business Chronicle last month, Chambers noted that most large-scale development in Atlanta over the past five years has occurred near a transit station. He foresees additional office growth occurring in established areas with MARTA access, such as Midtown, Buckhead and Central Perimeter, as well as in emerging markets like Assembly, a mixed-use development and movie studio at a former General Motors plant in Doraville.

Indeed, a number of significant projects have been proposed or are in the works around MARTA stations over the past year. For example, MARTA is collaborating with the cities of Atlanta and Decatur to conduct a planning study on how to create a TOD that “embraces the area’s community and culture,” Curbed Atlanta reports. In February, the Atlanta Regional Commission (ARC) awarded MARTA $100,000 to create a conceptual plan for development around the station. A website has been launched to solicit public suggestions and comments on the plan. 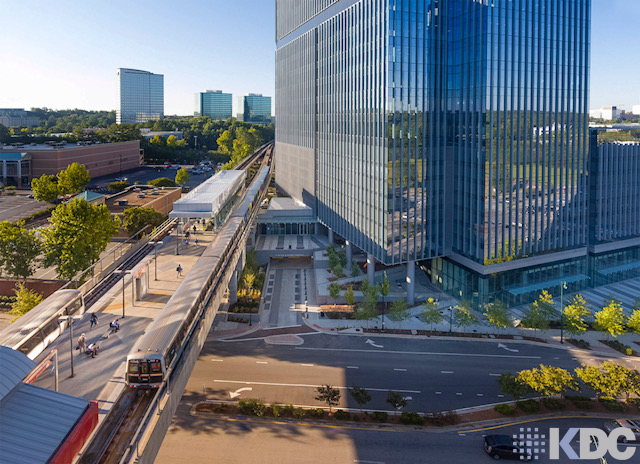 At the Avondale station, a 7.7-acre surface parking lot will become a mixed-use development that will include 378 market-rate apartments, 92 units of affordable senior housing, an 800-space parking deck, and 22,000 square feet of retail space. It, too, is slated for completion next year.

Meanwhile, under-used parking space at the Edgewood/Candler Park station is being transformed into 224 high-end apartments, a neighborhood park, a local restaurant, a multifamily building, and a headquarters and performing arts center for a local youth development organization. Future phases could include additional housing and commercial uses.

And finally, a development at the King Memorial station marks MARTA’s first modular-construction TOD. The $51.3 million project will be built just south of the station, next to Oakland Cemetery. It will include 400 apartment units—of which at least 80 will be affordable housing—and 10,000 square feet of retail space. Construction will start this year and should be finished relatively quickly, since the project is modular. That means that each unit will be constructed off-site and then hoisted into place, says Curbed Atlanta.

For those who want to track the progress of these projects, MARTA has created a web site, CoUrbanize.com, that includes visuals. We can expect to see more of these projects coming online in the near future. According to Frank, developers are knocking on MARTA’s door with unsolicited proposals with increasing frequency. Could the solution to Atlanta’s traffic woes lie in this TOD trend? Time will tell, but to hear KDC and MARTA tell it, TOD is the future of development.