As the Offshoring Trend Approaches Driving Age, Some Operations are Coming Home

In the early 2000s, when the offshoring trend got traction in the geographic strategy world, you could hire 4.5 support personnel in a back office or shared services operation in Bangalore, India for the same salary as 1 worker in a typical mid-size U.S. city. Other popular offshoring destinations such as Malaysia,the Philippines, Bulgaria, the Czech Republic, and Guatemala all had favorable wage ratios greater than 3:1. The strong financial business case for offshoring was only slightly weakened when organizations added the necessary costs of bifurcated operations, including duplicate facilities, management, and support functions.

Fueled by the opportunity for wage arbitrage -- the ability to pay less for a given amount of work in one place than another -- momentum for offshoring grew and many multinational organizations added an offshored workforce to their operational platforms. During this first wave of offshoring, these organizations evaluated the opportunities for cost reduction much more carefully than they did the offshore geographies’ operating environments. The rationale for this perspective was three-fold. First, the financial business case was so convincing that many businesses simply overlooked any operational quality concerns. Second, India’s technical workforce’s role in fixing the Y2K bug was powerful evidence of the existence of wage arbitrage. And third, most organizations that offshored part of their operations felt willing (at that time) to work through problems resulting from conducting business processes in environments with lower operational quality including weak labor availability, high employee turnover, and relatively poor labor quality, as well as risks such as poor infrastructure, immature regulatory protection, and safety and security issues. There was a strong belief in the early 2000’s that these elements of operational quality would quickly improve in the offshore countries as those countries sought to maximize foreign direct investment. 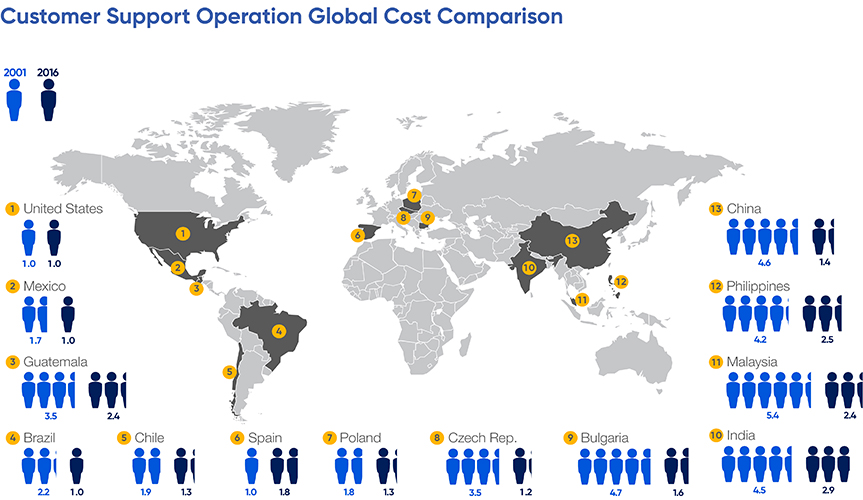