As consumers, fearful of the coronavirus, drive online sales, a narrative around industrial space markets has emerged: a surge in e-commerce will be a net positive for warehouse space markets. At least relative to office and retail, industrial markets will go largely unscathed. The argument is somewhat compelling with large warehouse users such as Amazon, and a variety of other retailers all rushing to add to their online capacity.

Against this bullish outlook is a decidedly more negative economic backdrop for the economy at large, including the manufacturing sector and the entire production process. This expected contraction in economic activity looks set to outweigh the net new demand from e-commerce companies, leaving the industrial market decidedly softer relative to pre-COVID-19.

Before discussing the impact of the general economy, it is worth mentioning several other factors that are likely to add to the demand for warehouse space.

Of note is the rising possibility that many companies will need to increase the amount of inventory typically kept on hand as supply chains remain in question, borders become more viscous and transporting goods becomes more challenging. Ships, trains, trucks and air freight have all been impacted by the sudden drop and change in demand, coupled with supply constraints. In many cases, this has resulted in irregular schedules and a degree of uncertainty as to timing and cost. Just-in-time inventory, with its cost saving benefits, has now been called into question, as surety of delivery is now the top priority. With the emphasis now on just-in-case inventory, the new normal may require warehouse users to consider carrying an extra 10% to 15% more inventory than had previously been the case.

In tandem with the possible change in supply chains, the idea of deglobalization is beginning to gain traction with the potential to significantly impact trade patterns across many regions of the world – including North America. In the short-term, any changes in trade are expected to be relatively minor due to the complexity and long-term nature of most supply chains, but long-term trade patterns established over many decades could very well be disrupted. [Note: US import tariffs prior to COVID-19 were already calling into question global trade flows].

The recent breakdown in normal supply chain activity combined with rising geopolitical concerns is beginning to put pressure on many companies to diversify their supplier network. Much like after 9/11, when it became apparent having too many resources in one location [Manhattan] put companies at risk of not being able to function, many businesses are evaluating their preparedness to supply disruptions as currently being witnessed. As a result, many goods producing businesses are expected to be far more likely to diversify their stable of suppliers, building more redundancy and diversification into their operating systems. While far too early to say with certainty, the idea of regional (Americas/Europe/Asia Pacific) supply chains is looking like a possible replacement for the trans-oceanic supply chains that have been the hallmark for much of the past 30 years. Remaking supply chains is not simple or straightforward, and will take years, not months. Likewise, re-shoring is far from straightforward, but early signs suggest there will be a number of macro changes that could have a significant impact on warehouse users.

Top industries most likely to reconfigure supply chains due to reshoring:

A Very Bullish Case, But……

Surging e-commerce, increased inventory levels, and a realignment of supply chains towards Canada, the United States and Mexico, would all be very bullish for North American warehouse markets, however, a markedly slower economy cannot be overlooked. Industrial markets have long moved in tandem with the general economy with an almost perfect 1:1 relationship. With most economic forecasts projecting a 4% contraction in the economy [United States, Annual, 2020] it is not unreasonable to expect a similar contraction in leased space. Even with the above noted tailwinds, a severe contraction in manufacturing alone will be a significant negative. Of note, April Purchase Managers Indices [PMI] across the globe were either at record lows, or back to levels not seen since the Global Financial Crisis. Similarly for the United States, the US Institute for Supply Management [ISM] April index fell to 41.5, an 11-year low, and well below “50” [threshold for expansion or contraction], with the New Order sub-index in particular registering 27.1 – the lowest level since December 2008.

A more nuanced understanding of warehouse markets is required to fully understand how the industrial market is likely to playout. As a pretext, e-commerce, and companies involved in warehousing and distribution, mostly inhabit large, or big bay industrial. By contrast, local businesses, often more service-oriented and only serving a relatively small geographic area, mostly occupy small bay space. Because of the different demand drivers, and based on the outlook for distribution versus manufacturing and service focused industrial occupiers, the two are expected to perform very differently. The former could surprise on the upside, while the latter could see demand shrink substantially. Using 100,000 square feet as the threshold separating small bay and big bay, 49% of the US industrial market is small bay and 51% is big bay*. If over the next 12 months small bay contracts by 4% in tandem with the overall economy, and large bay expands by 2% [5-year medium growth rate], the net contraction would be 2%.

Closing Thoughts As the world migrates very quickly to online shopping, there is no disputing demand for warehouse space is only going to increase. Against this new wave of demand for big bay distribution space [and fulfillment centers], there will be a significant decline in demand for non-distribution space. The US industrial market will increasingly be a market of two halves. Market conditions for small bay space will eventually return to pre-COVID-19 levels, but in the near-term demand for smaller, more service oriented space will be very sluggish.

This is the fourth in a series of Cresa Viewpoints covering the COVID-19 crisis.

Ross takes a highly reasoned approach to his advisory role. Understand the client, understand their business, and then find the right solution, that not only meets the stated goals, but be a reason for their success

See other blogs by Ross Moore Marketing Your Space with Video

To demonstrate the quality of your space, it is vital to properly market your office through diverse multimedia. Whether it’s for an upcoming sublease or sale, or just to demonstrate your company’s value to potential talent, a virtual tour video serves as an innovative and interactive asset. 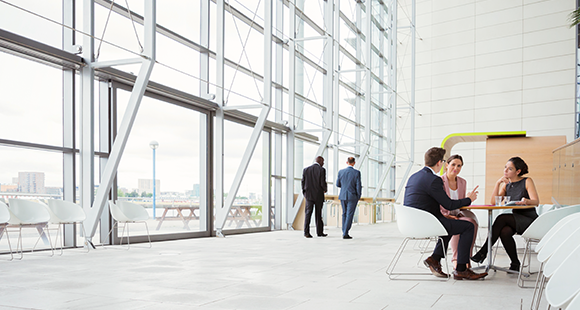 Are You Prepared To Have Your Employees In The Workplace?

What are the top issues you need to address before you reopen your office if you haven’t already? If your answer solely discusses social distancing, you’re only addressing one aspect of a safe work environment. Other critical topics could make or break your return plans.