Thanks to the Braves, the Cumberland Market Is Hitting It Out of the Park

On August 10, Bisnow (www.bisnow.com) held a panel discussion about the state of the Cumberland market now that the Braves’ SunTrust stadium is open for business. The panelists spoke about some of Cumberland’s largest projects, the impact of the Braves’ move there, and the influx of Millennials into the area.

Thanks in part to the Braves’ new stadium, SunTrust Park, and the surrounding development, the Cumberland market has seen the construction of the most new commercial buildings in metro-Atlanta over the past year. Among the more prominent of these new developments is the Riverwood 200 office park, which delivered 261,000 square feet of Class A space. Four other new Class-A buildings are also under construction. Some $2 billion in private investment has flowed into the area around SunTrust Park, and the numbers keep growing.

Cumberland used to be an office market but is rapidly transforming into a live-work-play market, largely due to the many mixed-use, multi-family, and retail developments that have emerged around the stadium. The Battery—the sprawling, mixed-use development surrounding SunTrust Park—has attracted a multitude of restaurants and retail stores. Sport equipment maker Mizuno, for example, is making its first foray into retail by opening a store there.

All of this activity is luring in the coveted Millennial demographic. Almost a third of Millennials moving into the metro area now move to Cumberland, the speakers said. The area offers not only a plethora of amenities but also access, as the stadium sits at the nexus of I-75 and I-285. That access is set to improve, as Georgia will invest $15 billion in the next ten years into highways, and much of that money will go to the Northwest corridor. Managed toll lanes will be created to alleviate traffic, and interchanges will be improved, for example.

Many of the Millennials flocking to Cumberland seem to be moving into The Battery. According to Braves parent company Liberty Media Corp., 80 percent of the residential units at the development are leased, with 60 percent of them already occupied, the Atlanta Business Chronicle reports. The Battery Atlanta has 600 multi-family units. 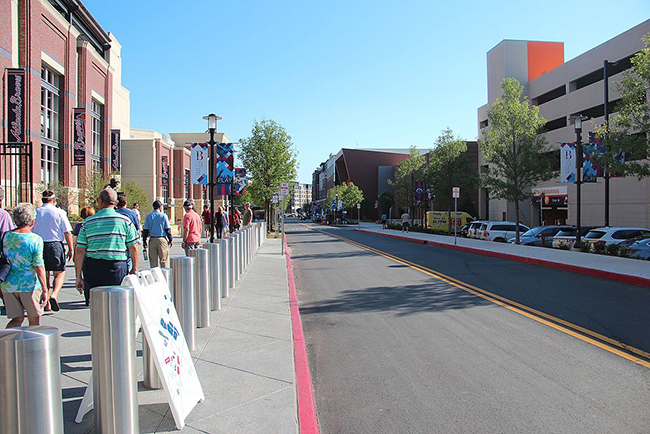 All of this activity is happening despite the fact that only 30 percent of The Battery’s retail tenants have moved in. Not to worry, though: the development is 75 percent leased, and retail and restaurant establishments keep steadily opening. Some top names in the dining business are locating or have located there; for example, famed Atlanta chef Ford Fry is opening another of his concept restaurants at The Battery in October, and celebrity chef Hugh Acheson will open his third restaurant there in early 2018.

When complete—and so far The Battery is on time and in budget—the development will encompass 1.5 million square feet of mixed-use space, including about 400,000 square feet of office and retail space.

As for the Braves themselves, business could hardly be better. According to the Chronicle, Liberty CEO Greg Maffei says that “attendance at the 41,000-seat SunTrust Park increased 36 percent year-over-year as of August 7.” The Chronicle has reported in the past that the team has 122 corporate partners, the highest corporate revenue in Braves history, and TV ratings that have jumped by 50 percent this season.

Clearly the Braves have served as a powerful catalyst for the growth of the Cumberland market. So far, performance for both the team and the market is exceeding expectations. In this case, that old quote from baseball movie Field of Dreams has proven true: “If you build it, they will come.”

Billy Hobbs, Managing Principal of Cresa Atlanta has focused 32 years of his career on occupier advocacy and is an active member of CoreNET. He represents tenants in all Atlanta submarkets and across the nation.

See other blogs by Billy Hobbs