This article appeared originally on CoStar. 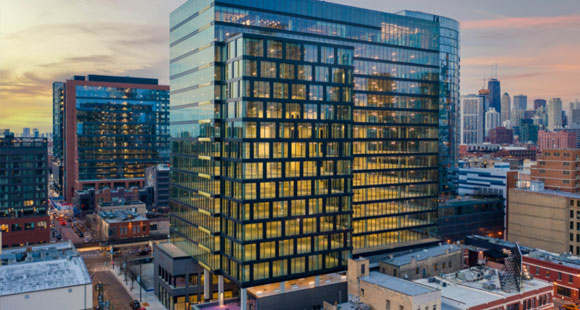 Cresa, the global brokerage firm that effectively relocated its headquarters to Chicago last year when it added several top executives, including a new CEO, based in the city, has picked a building to house its main offices.

The global brokerage firm said Friday it has leased approximately 21,000 square feet at 167 N. Green St. and plans to move in this summer. Cresa plans to vacate its current space at 150 N. Wacker Drive as part of the move, a company spokesperson said.

The office building, called 167 Green Street, was built in 2020. It's located in Chicago's Fulton Market, which has been transformed from a meatpacking district to the fastest growing urban office market in the United States.

One of the largest U.S. tenant representation firms, Cresa's headquarters had been in Washington, D.C., since early 2016, when it named Jim Underhill CEO. Underhill stepped down just over a year ago, and former DTZ chief executive Lickerman, who lives in greater Chicago, took the reins as interim CEO.

Chicago emerged as the brokerage firm’s de facto headquarters over the past two years when several other top executives who call the city home joined the firm. Chief Financial Officer Kristin MacCarthy is in Chicago and so are general counsel and top HR officer Ryndy Ditmars and head of Cresa's global portfolio solutions group Tricia Trester.

Greg Schementi, who is scheduled to start as the new Cresa president in July 2022, also is based in Chicago.

“Yes, I think we have a critical mass here in Chicago, but you know, we’re a national business," Lickerman said in an interview in August. "I don’t want to overplay the value of HQ because our business is in D.C., in Phoenix, in San Francisco, in Atlanta. It’s a national platform."

In moving to Chicago, Cresa joins giant brokerage firms JLL and Cushman & Wakefield in the city. Toronto-based Avison Young has its U.S. headquarters in Chicago.

Cresa said its new workplace would house its growing Chicago tenant advisory practice as well as its project management and lease administration teams. The office build-out will contain a mix of collaborative and private work areas with a modern design that Cresa said would serve as a model for the firm’s future offices.

“This will be our clubhouse and our laboratory, putting our ideas to work and adopting the technologies that drive productivity in the workplace today, this is going to be fun," CEO Lickerman said in a statement.