Cava to relocate its headquarters within D.C.

This article appeared originally on the Washington Business Journal.

Cava Group Inc. plans to uproot its headquarters from D.C.'s Chinatown for a new home at the Wegmans-anchored City Ridge mixed-use development in Upper Northwest.

The Mediterranean fast-casual restaurant chain, now based at 702 H St. NW, has inked a deal to lease the top floor of 14 Ridge Square, part of the redevelopment by Roadside Development and North America Sekisui House LLC of Fannie Mae's former headquarters at 3900 Wisconsin Ave. NW. Cava is the latest tenant to sign on for space at City Ridge, which is just a few blocks from the Tenleytown Cava at 4237 Wisconsin Ave. NW. Terms of the lease, including precise square footage, were not disclosed. 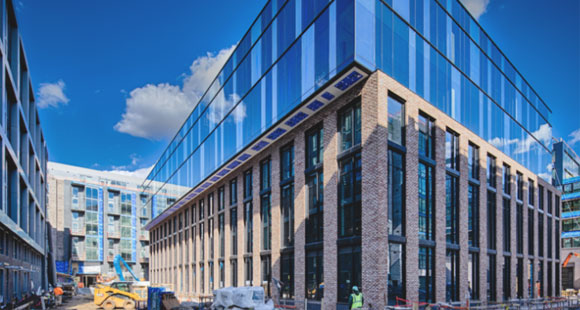 "As we reimagine the future of work, the new site will be an equally creative and convenient center for our teams," Brett Schulman, Cava's co-founder and CEO, said in a statement to the Washington Business Journal. "We are looking forward to being neighbors with the City Ridge community."

The move comes amid the ongoing Covid-19 pandemic, which has prompted many restaurants and restaurant chains to put more emphasis on carryout, delivery and catering services. That includes Cava, which launched a catering business last year, though its plans to do so predated the public health crisis. Cava is also in the midst of transitioning many of its Zoe's Kitchen restaurants into Cavas.

City Ridge delivers this spring, with the first tenants, Cava among them, slated to move in over the summer. The project is slated to include 691 residential units, 155,000 square feet of retail, and 167,000 square feet of office. Roadside and NASH went into the redevelopment anticipating lesser demand for office space but were able to attract tenants including the International Baccalaureate, which is relocating from Bethesda. The mix of office, residential and retail uses, including an Equinox fitness center, KinderCare day care center and Tatte Bakery & Cafe, has helped to reestablish the site following Fannie Mae's departure for new space in downtown D.C., said Roadside partner Jeff Edelstein.

"What we're really excited about is it's really proving out that this is a location companies see as a different creative approach to office space," Edelstein said. Roadside has bought into that notion with its own relocation to 3939 Wisconsin Ave. NW, across from City Ridge, Edelstein said.

Cresa's Sam Heiber represented Cava in the negotiations, while the landlord was represented in-house and by Tranwestern's George Vogelei.

The Bowser administration had been working with Cava to ensure its headquarters stayed in the District, but no financial incentives were offered as part of the deal, according to the office of the deputy mayor for planning and economic development. The move should support Cava's growth plans, according to John Falcicchio, deputy mayor for DMPED.