PepsiCo's Chicago office to go from 17 floors to one, in move to ultrawide Old Post Office

PepsiCo plans to move its 1,300 Chicago workers from an entire 17-story building to a single floor in the redeveloped Old Post Office, becoming the latest company to spread out in an ultra-wide building.

The Purchase, N.Y.-based food and beverage giant has leased 192,000 square feet on the third floor of the 2.8 million-square foot former post office, where it plans to move in winter 2020, the company said.

PepsiCo’s Chicago office is the headquarters for its Gatorade, Quaker and Tropicana brands, as well as PepsiCo Beverages’ North America Central Division. It is the company’s second-largest office by employee count, trailing only the Frito-Lay headquarters in Plano, Texas.

Its offices currently occupy all 412,000 square feet at 555 W. Monroe St., PepsiCo spokeswoman Nora Quartaro said. All employees will fit on a single floor because of efficiencies of the new space, which will have an open layout, she said.

“We’re flattening out, which we think will make us more collaborative and innovative,” Quartaro said. “The fact that we can modernize and revolutionize such an iconic building is exciting for us.” 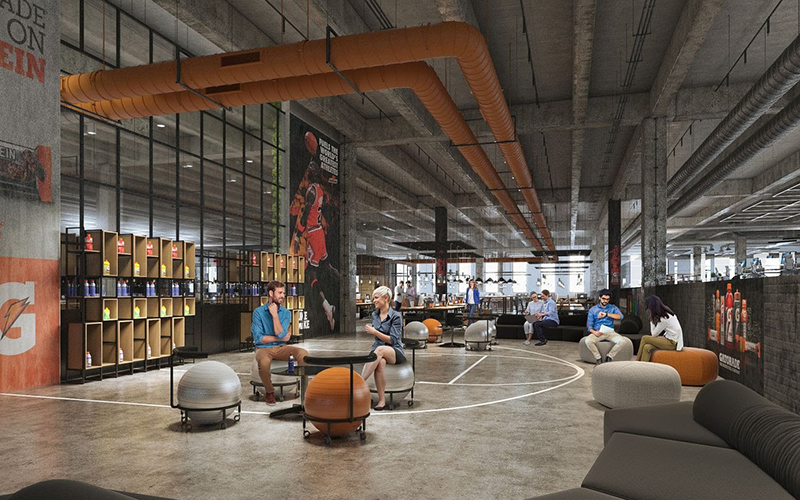 PepsiCo’s lease is another high-profile example of corporations piling into older, ultrawide buildings in Chicago, where they’re able to design open and collaborative workspaces.

The trend in recent years has benefited massive office buildings that were designed for other uses, such as the Merchandise Mart and the former Montgomery Ward catalog building at 600 W. Chicago Ave.

The Old Post Office, at 433 W. Van Buren, recently has emerged from more than two decades of dormancy to one of the most impressive leasing runs in recent memory.

Developer 601W Cos. has more than 80% of the office space leased or in advanced negotiations, including a 463,000-square-foot lease with Uber Technologies and a 202,000-square-foot deal with Deerfield-based Walgreens.

PepsiCo is the third-largest tenant to take space in the building. The company’s talks to move to the Old Post Office were first reported in September.

The company’s search for space was focused around its current office, which is near commuter train stations, since the company has a mix of city and suburban employees, Quartaro said.

Tenants began moving into the Old Post Office in October, and by the time it’s full there are expected to be at least 15,000 workers in the building. The redevelopment will include a 3.5-acre rooftop park for tenants, ground-floor retail including a food hall and an outdoor plaza along the river.

The Old Post Office’s redevelopment is part of a broader emergence in the southwest corner of downtown. That includes a planned office tower alongside Union Station where BMO Financial has leased 500,000 square feet, and a $500 million retail expansion to the base of the city’s tallest skyscraper, 110-story Willis Tower.