Coral Gables has the largest supply of new office product delivered year-to-date and currently under construction. Despite newly delivered product and under construction office space expected to be completed between 2019-2021, there are no indications of rates slowing in second-generation space that is now competing with new product. Two recent deals in Miami Tower that were inked for Citi National Bank and UBS, totaling 140,000 SF, is what the Downtown market needed to stabilize itself in recovery from the recent trends of companies moving to Brickell and Coral Gables to be closer to labor and talent.

Northeast Dade is home to some of South Florida’s most dynamic retail trade, education and health services companies. The Northeast Dade submarket recently received a major addition in the form of the 88,000 SF Beacon Tower of Aventura. The building was approximately 90% leased as of November 2018. Office development has been active in Aventura, and nearly 100,000 SF are currently under construction. The vacancy rates were some of the tightest through mid-2018, however.

Southeast Broward also is a very active market. The main office nodes are in Holly-wood, along Hollywood Boulevard and Sheridan Street. Some major tenants here include NV5, HEICO, Woundtech and Memorial Hospital. The majority of the new office development is coming in Hallandale. The Accesso Office Building was built in 2018, featuring 27,644 SF of Class A office space; moreover, there are several additions to Gulfstream Park underway, including the concert venue “Cinemex.”

Miami’s submarkets that are west of the airport continue to entice new tenants as a result of record-setting demand that has led to higher rental rates in the eastern submarkets of Downtown, Brickell and Coral Gables. Rent growth is nearly doubling the traditional lease escalations; the average sits at 6.0%.

In September, CBRE sold an eleven-building, 1 million square foot office park located next to the Miami Airport at 7200-7665 Corporate Center Drive. It sold at 83% premium. The New landlord, Walton Street Capital, has increased rents by 25%-50% depending on the building.

Doral is currently South Florida’s most popular area with more new residents than any other city each month. Courtesy of Cresa’s data partner to CoStar, “The city of Doral is quickly becoming one of the major areas for new development of all property types within the submarket. The major residential nodes are primarily suburban, and there has historically been little opportunity for urban living among the business parks and industrial buildings. This dynamic is changing with the addition of two large, mixed-use projects in the heart of the city: Downtown Doral and CityPlace Doral. Located along the eastern border of the Trump golf course,

Download your copy of the Miami Q4 2018 Market Report. 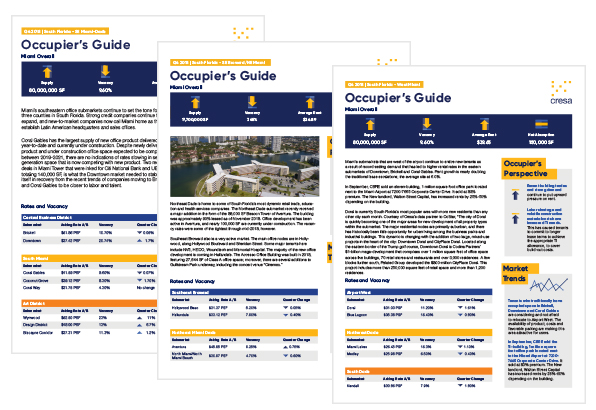