With a new normal of work-from- home employees or hybrid work- forces, office tenants in the North Los Angeles market are downsizing.

“I don’t think there is any company that’s not evaluating space,” said Richard Bright, executive vice president at brokerage Jones Lang Lasalle Inc. “And it’s being driven by lease expirations. They’re asking, ‘How much space to we really need?’”

One Warner Center firm is answering that question by chopping off more than half its space.

The new smaller location mirrors the evolution of its workforce since the outbreak of the pandemic in March of last year. Of the company’s staff of 850, about half are working full-time from home while the other half is on a hybrid office schedule, according to Med- Point Vice President Sheldon Lewenfus.

Lewenfus originally had his doubts about the work-from-home situation.

“Because I’m kind of old school, I didn’t think this would work,” he said. “But the employees like it and the productivity is the same. Everyone is happy. They don’t have to drive to the office.”

Greg Lovett, of L.A.-based real estate agency Cresa, represented MedPoint in the transaction. He was able to locate the right fit for the company’s physical downsize.

“We’ve moved them from Warner Center where they’ve been for 12 years,” Lovett said. “They wanted to upgrade to better amenities.”

In addition to restaurants, movie theaters and a gym housed within the Sherman Oaks mall, employees will be walking distance from eateries and shops along Ventura Boulevard that will appeal to those commuting to MedPoint’s new address. 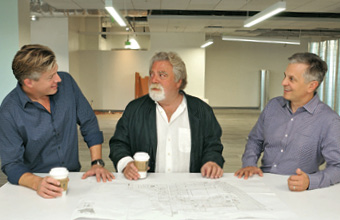 However, it took some time before this site became the company’s top choice.

“We had multiple properties engaged and (Galleria property owner) Douglas Emmett won out,” Lovett said. “The negotiations took a significant amount of time to get the landlord to understand.”

The arrangement was new for both parties, Lovett said.

“The negotiations were very creative because real estate transactions are changing,” he said.

MedPoint had decided earlier this year to downsize the company’s office space after management gauged the preferences of its workforce.

“It took us many months to figure out if all of these dynamics will work,” Lewnfus said. “We had a lot of surveys go out to the employees and middle management.”

“For this particular industry (professional services), they studied their own business and it worked out for them,” added Lovett. “When (Lewenfus) saw that production was up so high, he said, ‘This is great, it works.’”

At the Galleria, MedPoint will occupy a second-floor space at Building B, next to a Star- bucks Corp. and DeVry University branch.

“We looked at a couple of properties and this one was best suited,” Lewenfus said. “We were able to negotiate a good deal.”

The new MedPoint space is currently undergoing tenant improvements with the move expected to happen next month or December, according to Lewenfus.

As leases approach their expiration dates, companies will contemplate how best to move forward in the post-COVID economy.

Not for everyone
Many companies appear divided on how to approach a post-COVID workplace.

Early in the pandemic last year, Nation- wide Insurance kept four corporate offices in Ohio and closed other sites. Recently, firms such as Goldman Sachs and Morgan Stanley insisted on employees returning to the office after Labor Day. Other companies,
such as Microsoft Corp. and Apple Inc., have delayed the return to office to this month while Amazon Inc.com, Facebook, Google and Twitter may wait until next year due to the Delta variant.

Cresa’s Ray Howden, who with partner Lovett has exclusively represented tenants for about 15 years, said that what’s happening with more institutional firms such as MedPoint is opposite of what is going on with studios and production companies in entertainment industry hot spots such as Burbank and North Hollywood. As competing streamers drive up the demand for content creation, the companies that serve them are looking for more office space.

“Our expertise is representing office users including entertainment, tech, gaming, service providers,” said Howden, who recently helped Fremantle, the producer of “American Idol” and “The Price is Right,” secure a 43,000-square-foot space at Reframe Studios, a 180,000-square-foot studio facility in development by Captiva Partners at 4561 Colorado Blvd. near Glendale. “Those who create content are growing their workforces. Creative types want to be together.”

For example, Netﬂix Inc. has expanded in the past year, gobbling up office space in Hollywood to become its biggest tenant. Last year the streaming giant leased 171,000 square feet for its first animation studio in Burbank.

In corners such as the gaming industry, “we’re not seeing COVID downsizes in that vertical,” Lovett added.

In July, when Howden negotiated a deal for his client 800 LoanMart, the long-running auto title loan company – a relatively traditional service provider – decided to stay put in the same space.

“We were able to restructure their lease,” Howden said. “We didn’t have to move. (Landlord Pacific Reach) provided a few benefits to reduce our occupancy costs and to provide us more time and not cause any disruption.”

Howden understood 800 LoanMart’s reasoning for extending the lease on its 40,000-square-foot corporate headquarters at 15400 Sherman Way in Van Nuys.

“The goal is to get to the other side of the pandemic,” he explained. “Who wants to commit to a lease right now when they don’t know what the world will be like afterwards?”

Higher vacancy ahead
JLL’s Bright described this moment in the market as a transition time for many local companies and there is “still uncertainty about longtime commitments.”

“The market is pretty flat,” he said. “You’re not seeing rents increase or decrease. There’s not a whole lot of velocity.”

Indeed, according to Colliers, asking rents in the San Fernando Valley were at $2.66 a square foot in third quarter this year, a bit higher than the $2.58 reported in the same quarter last year.

According to Savill’s Soto, there is simultaneously low high-rise leasing activity and much office construction unfolding, indicating a generational divide between institutional and younger businesses.

“There’s a disconnect between high avail- ability across the market and office development, which is very high,” Soto said, “because big tech and entertainment companies want new offices.”

But that’s largely the metro L.A. story, not the San Fernando Valley narrative, Soto said, save for outlier Burbank.

At 9 percent vacancy, Burbank has the lowest office availability by far, not just in the Valley but in all of Los Angeles.

Elsewhere in the Valley, Bright said, “there’s no question the vacancy rate is trending up. This will be a trend that continues on for at least the next (year or two).”

“Woodland Hills is not Hollywood or the Westside,” Bright said. “We’re trending in a tenant’s market in the next 12 to 18 months.”

Meanwhile, certain companies with enough employees working from home will right-size. Bright recently negotiated a deal for a major software company that occupied 40,000 square feet in Woodland Hills and relocated to half that space in Burbank.

For new companies, reducing space might not be so advantageous.

“There will be a lot of companies that will want to right-size,” Soto said. “But for start- ups, it’s very hard to collaborate when you’re not in the office. You’re less connected to that company than if you’re in the office. … And mentorships – it’s hard to seek out mentors when you’re working from home.”

But for traditional firms in the North L.A. market that can accommodate work-from-home employees, JLL’s Bright and Cresa’s Howden and Lovett feel that it’s a matter of time before more companies adjust their physical space downward.

“I do believe that’s the trend going forward,” Howden said. “Once we do have a clear path (post-pandemic), a lot of the service providers will take a similar tack.”