Market News
The DFW market led the nation in commercial property transactions in 2020, as many larger U.S. markets were hit harder by the COVID-19 pandemic.  More than $19.7 billion in commercial real estate deals were recorded in the local market, edging out Los Angeles ($19.0 billion).  Dallas previously ranked third in the nation among top markets in both 2019 and 2018.  Dallas-area property transactions were down 25% from 2019 levels compared to a 32% nationwide year-over-year decline.  More than $10 billion of the North Texas commercial property deals in 2020 were industrial assets, with $5 billion in apartment transactions and only $251 million in hotel transactions.

Nationwide, the office property sales volume for 2020 showed $67 billion worth of properties exchanged hands, which represents a 43% decline in volume from 2019 and reflects the general uncertainty around a return-to-office strategy and how the current work-from-home policies could affect future demand.  By the 4th Quarter 2020, office sales began to rebound, suggesting that buyers believe companies will return in some measure to centralized offices once an effective vaccine is widely available.

At the start of 2021, 9 million square feet of surplus DFW office space was being marketed for sublease.  The largest volume of sublease office space – more than 1.3 million square feet – is situated along the Dallas North Tollway in Plano and Frisco.  The largest sublease space being offered in the Plano/Frisco submarket is located in Liberty Mutual Insurance’s new high-rise building at Legacy West, where the firm has placed 227,500 square feet on the market.

More than 200 DFW commercial properties are on lenders’ troubled loan watch lists.  For most of the properties that are cause for concern, the owners are still current in making debt payments, but factors including lower occupancy levels and falling cash flow have triggered lender action.  The list includes The Colonnade in Addison, a 1,052,000 square foot, three-building office complex located at the hard corner of the Dallas North Tollway and Arapaho Road.  The Colonnade is owned by New York-based Fortis Property Group, which acquired the property in 2013 and has a $160 million mortgage loan outstanding with Morgan Stanley Mortgage Capital Holdings.

As more and more companies consider relocating from California to Texas, due in part to high taxes, burdensome business regulations, long commute times, high cost of living and high home prices, this chart below presents a snapshot of some of the economic factors that executive consider when weighing a relocation. 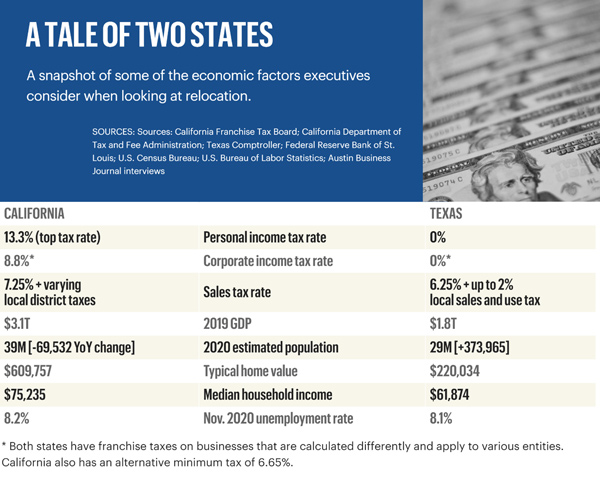 One site selection expert stated that businesses generally save 20% on overall costs (taxes, office rent, payroll, utilities) by making the move from California to Texas.  One of the biggest factors weighing on California executives considering a relocation is how to improve employees’ quality of life.  And housing affordability for their employees is at the top of that list.  For comparison, the typical home value in San Francisco is $1.38 million and the average apartment rent is $3,000 per month. In Dallas, the typical home value is $237,000 and the average apartment rent is $1,164 per month.  To add to this massive discrepancy in home pricing between the Golden and Lone Star states is the commute times.

California’s rising housing prices mean many people who work in the Bay Area or Los Angeles live in communities an hour or more away, where housing still costs 1.5 times as much as in Austin and twice as much as in Dallas or Houston.  The housing affordability crisis in California is the main reason that the Golden state’s population has actually started to shrink.  According to the U.S. Census Bureau’s 2020 population estimates, Texas added the most residents of any state last year, while California’s population lost 69,532 residents – the first negative population change for the state since 1900.  More than 86,000 Californians moved to Texas in 2020, an increase of 36% over the prior year.

Frisco-based Gearbox Entertainment Company, the developer of popular video game titles Brothers in Arms and Borderlands, is being acquired by a Swedish company in a deal valued at $1.3 billion.  Gearbox, founded in 1999, will become a wholly-owned subsidiary of Embracer Group, a global player in game development with 5,500 employees in 8 operating groups.  Embracer group will initially pay Gearbox $363 million with a commitment for an additional $1 billion over the next six years if performance targets are met.  Gearbox would need to accumulate pre-tax earnings of $1.3 billion in that time frame. In 2019, Gearbox’s revenue totaled $125 million and, in 2020, the company generated $123 million through September 30.  Gearbox is an employee-owned company with 550 workers and operates at The Tower at Frisco Square along Main Street.  Gearbox plans to hire new talent at its design studios in Frisco and Quebec city, create new studios and possibly even become an acquirer itself with the access to capital it now enjoys.

West Plano Village, the 9-acre mixed-use retail and office development at the northeast corner of Parker Road and the Dallas North Tollway, has been placed on the market for sale. Built in 2015 by the current owner, Dallas-based retail real estate firm Weitzman Group, the $100 million urban-style project comprises 70,000 square feet of retail space and 60,000 square feet of office space. Anchored by Eatzi’s and Kona Grill, the development is 70% leased and provides investors with stable, in-place cash flow with upside potential in the event the remaining vacancy, which consists of 2nd floor office space, can be leased up.

Addison-based Solis Mammography, the nation’s largest independent provider of breast health and diagnostic services, is acquiring outpatient medical imaging company Progressive Radiology to expand its services in Maryland, Virginia and Washington, D.C.  The combined operation will give Solis 85 centers in 9 major cities, including the newly-acquired 17 imaging centers in the D.C. metro area.

The CityCentral co-working facility on Spring Creek Parkway, just west of the Dallas North Tollway, has been placed on the market for sale at $12 million or $333 per square foot.  The 36,000 square foot, three-story co-working facility was built in 2017 and is currently 66% leased.  The 1st floor is largely open space with an amenity center and the 2nd and 3rd floors are exclusively built out with a combined 106 private offices.

Amazon, which already occupies more North Texas warehouse space – 12 million square feet – than any other company, is announcing six more DFW delivery stations.  These shipping hubs, which average between 150,000 and 250,000 square feet, are smaller than their huge 1 million square foot regional distribution systems and are part of what the company calls its “last mile of Amazon’s order process.”

Plano-based J.C. Penney, which was acquired out of bankruptcy in December by Simon Property Group and Brookfield Asset Management, has finalized a master lease agreement for 160 U.S. retail stores and six distribution centers with a property-owning entity owned by lenders, where the retailer will pay $156.6 million in annual rent to lease those properties for a 20-year lease term with 5, 5-year option periods.  Penney recently abandoned its former 1.2 million square foot corporate headquarters in Legacy West in October and has been searching for a new corporate home.

Plano-based biotechnology firm Allied BioScience, which is currently at 5000 Legacy Drive, will be doubling its operations with a headquarter move.  The company will be relocating two miles west into a 28,000 square foot space at One Legacy Circle (7500 Dallas Parkway).  Allied had previously moved from Uptown’s The Crescent building north to 5000 Legacy Drive in Plano in 2015.  The company has experienced rapid growth during the pandemic with national distribution of its antimicrobial coatings.  Last summer, one of the firm’s products became the first-ever antiviral product to receive federal approval to continuously protect against COVID-19 with a single application.  Allied is also planning to relocate its research and development lab into a larger space.